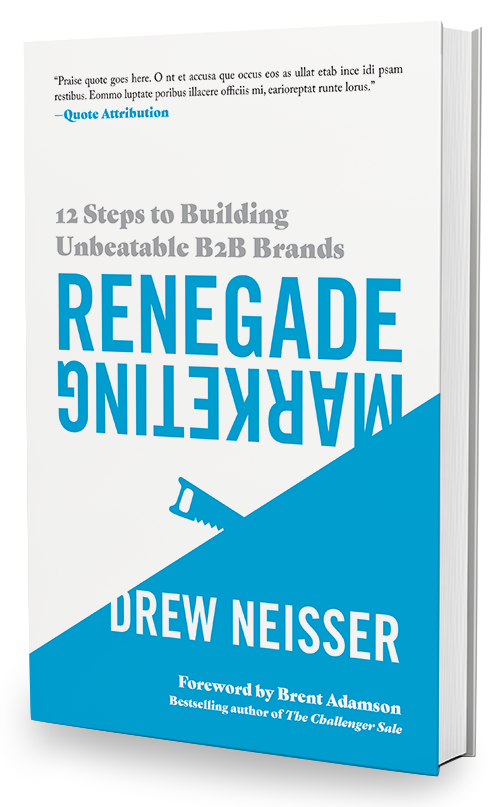 So you can radically simplify your B2B marketing and build an unbeatable brand.

How to bring focus to your brand story, develop a distinct strategy and pounce on your purpose.

How to work with your internal team and outside partners to develop your brand voice, archetype and visual identity.

How to create marketing that engages employees, cultivates customer champions and sells by adding value.

How to make sure you measure what matters, deploy the right automation tools and test to triumph.

Enjoy the stories of highly successful CMOs who found "renegade" ways to cut through.

As Drew puts it in this wonderfully engaging book, renegade marketers don’t just think differently, they successfully inspire others to act differently.

Drew Neisser, "The Renegade Marketer", distinguishes himself as a valued leader in the tough world of B-2-B marketing. He's a "renegade" because he consistently dares to be bold, original, and honest. His book is a treasure chest of insightful and actionable strategies and techniques. Reading it is an investment in business success.

This book provides an in-depth look at B2B marketing with helpful take-aways in every chapter. I found the chapter on Marketing Technology particularly insightful as it provided guidance for marketing practitioners on a very complex and confusing subject. What is the appropriate amount of technology? What works and what doesn’t? Where to find it, and how to measure its results? 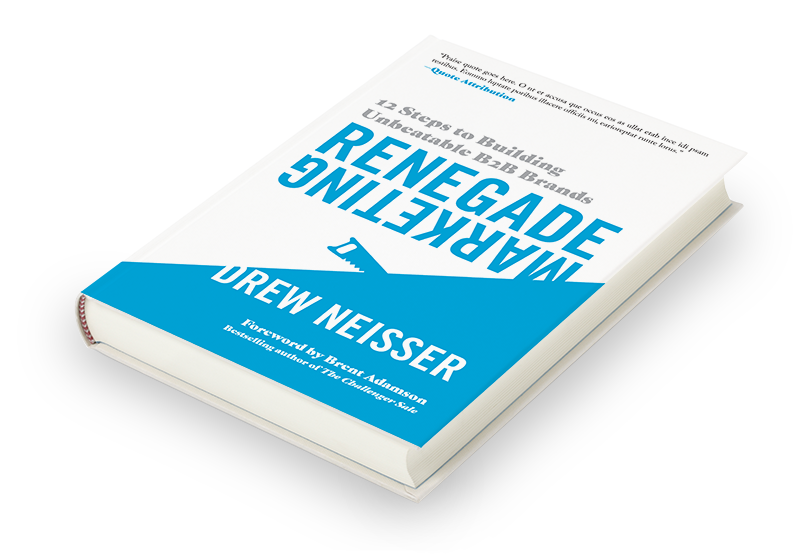 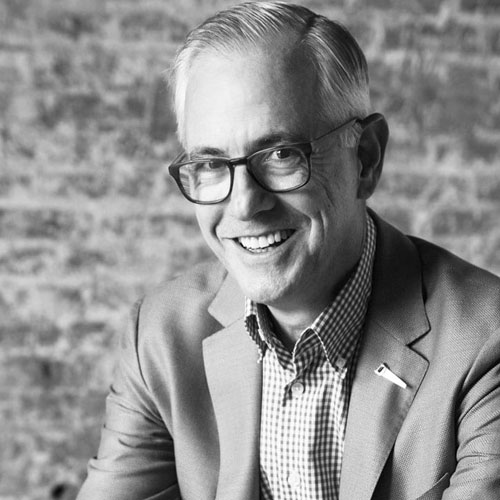 Drew Neisser is the founder of Renegade, the award-winning strategic boutique for B2B innovators, and CMO Huddles, the only membership organization exclusively for B2B CMOs. Uniquely wired as both strategist and writer, Drew has helped dozens of CMOs build unbeatable brands and told the stories of over four hundred marketing CATS via his top-rated podcast, Renegade Thinkers Unite, and his column for Ad Age. Neisser’s first book, The CMO’s Periodic Table: A Renegade’s Guide to Marketing, published in 2015, features interviews with sixty-four marketing leaders at top brands, including American Express, Dow, IBM, and SAP.

Ranked among the top B2B influencers, Drew has been a featured marketing expert on ABC News, CNBC, CBS Radio, and Tony Robbins’s podcast, among many others. Besides Ad Age, he’s contributed articles to FastCompany, Forbes, MediaPost, and CMO.com. A frequent keynote speaker and moderator at industry conferences, Drew is deeply passionate about the role that marketers and marketing can play to make the world a bit better, if not save the planet.

Drew and the Renegade team have won just about every award imaginable for creativity and marketing effectiveness. Among Drew’s credits, naming the Toughbook for Panasonic which he and Renegade helped grow to over a ½ billion in sales, naming and launching Case Makes, an “amazing” division of Case Paper, another award-winning Renegade client, and conceiving the HSBC BankCab, one of the most lauded and enduring guerrilla marketing programs of this century.

Diapered at Wells Rich Greene, trained at JWT, and retrained at Chiat/Day, Drew founded the agency that became Renegade in 1993, as well as CMO Huddles in 2020. He earned a BA in history from Duke University, lives in Manhattan with his wife Linda, and is the proud parent of two delightful young adults and a French bulldog named Louie. He currently sits on the boards of the Urban Green Council and the Duke Alumni Association. An avid Ben Franklin fan, Drew’s favorite aphorism remains, “Well done is better than well said.”